From breaking news and entertainment to politics, sports, and everyday interests, everything comes up on Twitter first. It seems like Twitter is testing a new DM UI design for Android users.

The new look is spotted by Twitter user Max Jambor, he also shared the images of the new user interface. 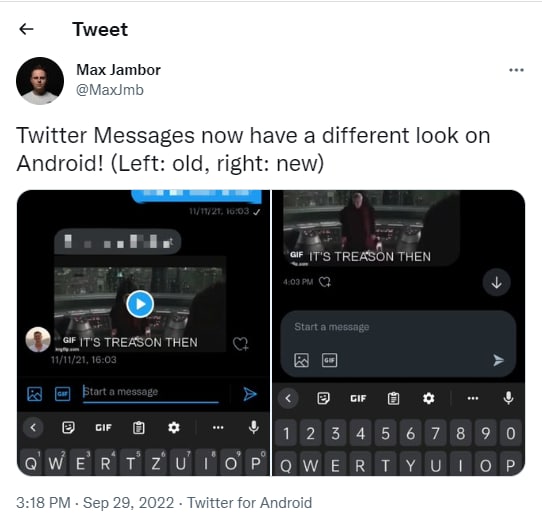 Another tweet from Dylan Roussel came that tells, Google’s Jetpack Compose tools are used to build this new design.

How does the new Twitter Android DM UI look?

The message typing area is expanded and other options- GIF search, image attachment and send button are all placed in a single box with round corners. The typing space has been shifted upwards and the rest of the buttons are placed at the bottom. The new design looks much more in line with Android’s design in recent years.

On the other side, in the current UI design, all the buttons and the text typing area are compressed into a single line.

This is a piece of good news for Android users as the new look may come to their Twitter UI in some time.

However, there are no official announcements by the company yet. Also, the microblogging site has not shared any information regarding the roll-out of the new design. It looks like the new DM UI design has reportedly started rolling out for some selected testers.