The next-generation VR headset developed by Sony for the PlayStation 5 (PS5) will be further upgraded. It will be equipped with a 4K resolution display, a vibration motor, and an inside-out tracking function. Out tracking) and focus rendering (foveated rendering) and other technologies.

Sony previously confirmed the development of a next-generation VR headset for the PS5 and plans to release the news after 2021. It also revealed that the controller of the device will be launched at that time, including a linear joystick, finger position recognition, trigger plate, and so on. (As shown in the DualSense handle in the figure below)

The product name of the current new generation of VR headsets is unknown, but Sony revealed some related product details. It is reported that this product can reach a resolution of 4000*2040 pixels (monocular resolution is 200*2040 pixels).

Although this parameter is slightly lower than the HP Reverb G2, it is better than the Oculus Quest 2 launched by Facebook. The VR headset is equipped with an interpupillary distance adjustment knob with fixation point rendering technology. In addition, the headset also contains a motor for developers to provide direct vibration feedback. 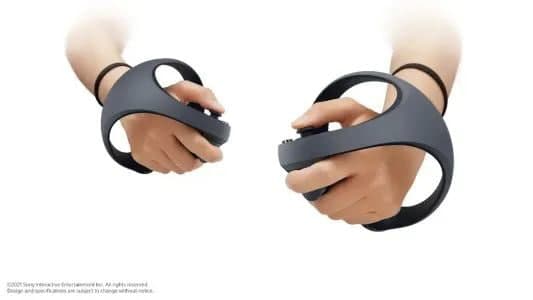 Compared with the previous generation of VR headsets, the new product to be launched this time has been greatly simplified in design, making the onboard camera and controller more flexible. At the same time, it will have a USB Type-C interface to connect with PlayStation 5.

In terms of systems, Sony’s new VR headsets have also undergone major improvements. It may super-sampling the focus area, and then provide the player with clearer image information. Although this is only a guess at present, as the focus rendering technology is applied to the production process, this rendering effect is estimated to be expected.

Sony launched the first-generation VR headset in 2016. The first-generation device is equipped with the PlayStation Move system released in 2010. The system requires a fixed camera. Players only have a pair of illuminated control sticks in a relatively small game area. When the time, the position of the head and hands can be tracked correctly. And now the VR headset design with a built-in camera is undoubtedly an upgrade from the original version.

In general, these new features and technologies provide a basis for PlayStation 5 players to enter real VR games, and resistive triggers are also a major feature of Sony VR. At the same time, this will be the first time Sony has introduced eye-tracking technology to the mass consumer market. Compared with the first generation of PlayStation VR, the new VR headset not only simplifies the design but also has a higher resolution. By the end of 2019, Sony’s PlayStation VR headset sales had exceeded 5 million units.

“A Hundred Flowers Blooming” in the VR Market

In addition to Sony, other seed players in the VR market, Facebook is expected to focus on the sales of Oculus Quest 2 for a period of time. The company’s CEO Mark Zuckerberg stated, “Although there are people in the market currently promoting their higher-quality VR Head-mounted display products, but I don’t think consumers will pay for it.” In addition, Zuckerberg also mentioned in a previous interview that Facebook is developing a Quest Pro equipped with advanced sensors, and it also includes eyes. Motion and face tracking technology.

In other news, Apple is exploring a VR head-mounted display device; HTC is focusing on the development of wireless VR, and their main target group is concentrated in the commercial market; Microsoft supports the development of VR, but there is no sign that the company’s Xbox VR gaming headsets will be launched.

Although Oculus Quest 2 dominates the VR market this year at an affordable price ($299), the major Internet giants are vying to gain momentum in the VR field, and 2020 may become a new match point in the VR market.

Conclusion: A sense of experience and new technologies may be the key to Sony’s success

The new generation of VR headsets developed by Sony has greatly improved the system and design from existing models. Eye-tracking technology is a highlight of this product. As one of the giants in the game field, Sony has strong control over game development and player psychology.

After the major Internet giants have moved into the VR market, Sony has followed closely. But in order to have a place in the vying VR market, Sony must put more new technologies and new functions into product design while ensuring a sense of gaming experience.

Deals: Here are the best budget gaming PC deals for May 2021