As per the recent sharing of a Weibo tipster- UncleMountain, Huawei may soon launch the EVO-certified version of MateBook 14s. In addition, it’ll also have the thunderbolt 4 interface delivering significant advantages like 8K video sending signals, 32Gbps data rate, and so on. 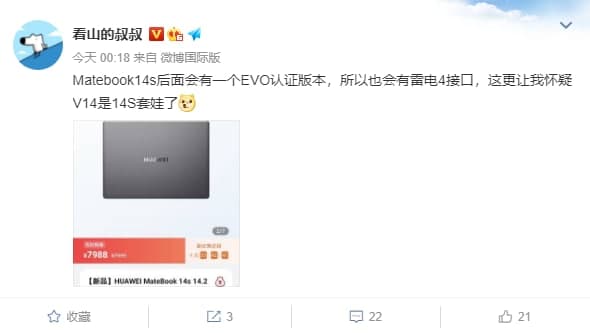 Well, this laptop was launched with two processor variants of 11th-generation Intel Core  i7-11370H and i5-11300H. Meanwhile, it has three color variants of Spruce Green, Bright Moon Silver, and Deep Space Gray. Among them, the i7-11370H in deep space gray is certified with EOV.

It seems Huawei is planning to launch more variants that passed the EOV certification. However, there is no news like this for the Huawei MateBook 13s that was launched alongside the 14s.

In addition, its also certifies by TUV Rheinland hardware-level low blue light and no flicker test to blocking the harmful rays. It comes with a smart brightness mode and Huawei exclusive copper double heat pipes with a shark fan.

Speaking of the main highlight of MateBook 14s, it offers mobile application support using the mobile app engine. The users are able to install and play apps and games directly on the larger screen of the laptop.