Clarifying that this is exclusive information, the source has published the specifications for the Intel NUC mini-PC based on Jasper Lake processors. Codenamed Atlas Canyon, won’t hit the market until the first quarter of 2022 due to a global shortage of chips.

Interestingly, for the first time in NUC history, an entry-level configuration will be without a 2.5-inch drive, only with an M.2 SSD. The novelty will be available in the form of ready-made mini-PCs with Windows 10, in the form of a barebone to which you will need to add RAM and storage, and in the form of aboard.

None of these processors support multithreading, that is, the number of concurrently executing threads is equal to the number of cores. The source draws attention to the fact that the NUC 11 Essential will receive active cooling, despite the low TDP value of the processors.

The mini PC can be configured with up to 16GB of DDR4 RAM using SODIMM modules. Supports dual-channel mode and modules up to DDR4-2933. The PCIe x4 and SATA interfaces are laid out in the slots for M.2 2280 drives. Some variants will have an onboard 64GB eMMC storage. 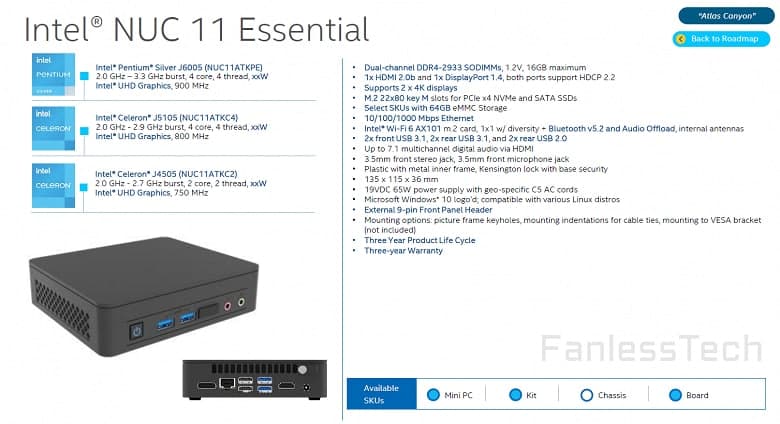 The equipment will include a Gigabit Ethernet port, a wireless card that supports Wi-Fi 6 and Bluetooth v5.2, HDMI 2.0b, and DisplayPort 1.4 video outputs with HDCP 2.2 support.

The dimensions of the computer are 135 x 115 x 36 mm. The kit will include a 65W power adapter delivering 19VDC. The mini PC will be backed by a three-year warranty. No pricing information is known as of now.

Lenovo Xiaoxin Pad Pro to be based on...