The Huawei P50 Pro is said to come with a 4G enabled Kirin 9000 SoC and not 5G, which was expected. The lineup is approaching its release date which is set for July 29. The company will unveil three devices including Huawei P50, P50 Pro, and P50 Pro Plus.

According to the info, the Weibo blogger has revealed that the 4G Kirin 9000 SoC equipped Huawei P50 Pro’s demo unit has model number JAD-AL500 and is available in three colors as Yaojin black, Snow-white, and Cocoa tea gold. 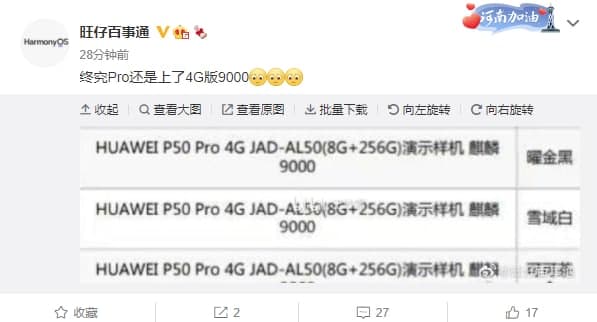 It was previously reported that these devices will come with Kirin 9000 5G and Snapdragon 888 4G chipsets. But this new leak suggests, even the Kirin got just a 4G. It makes us think about if any of the P50 phones will have 5G because it doesn’t seem to.

As per the reports, Huawei has contributed a lot and even topped the list of 5G markets this year, while its own smartphone lacks the support of high-speed internet service. This seems to be disappointing for the eagerly waiting Huawei fans, who now have to think twice before buying a 4G handset.

Furthermore, the company is also said to launch the 5G version of the P50, these devices will be separated on the basis of 4G and 5G, while the 4G ones will be shipped initially and the 5G will join later.

Besides these Huawei P50 phones, the company is also planning to launch several other products as well including a Sound X smart speaker, new Smart Screens, Children’s Watch, and more.

Further, these new smartphones are also said to bring a new version of HarmonyOS (an upgrade version). This means there will be some more added tweaks in this new OS that will also roll out to other eligible Huawei devices later on.

Ahead of their official launch, the Chinese tech giant has also released two teaser’s which mainly focus on an advanced camera system these phones will be featuring. The main focus will be on its zooming capability which is rumored to be 20x optical, while a 200x digital zoom.