Huawei’s upcoming July 29 event will bring the most awaited Huawei P50 lineup and the post-launch preparations are at their peak. According to the latest info, the Huawei P50 prototypes are ready at offline stores.

However, this time may be due to the component shortage, there are very less prototype available at the stores, even some of them just carry a single prototype. So, if you want to take a closer look at Huawei P50 then you have to rush to take a look. 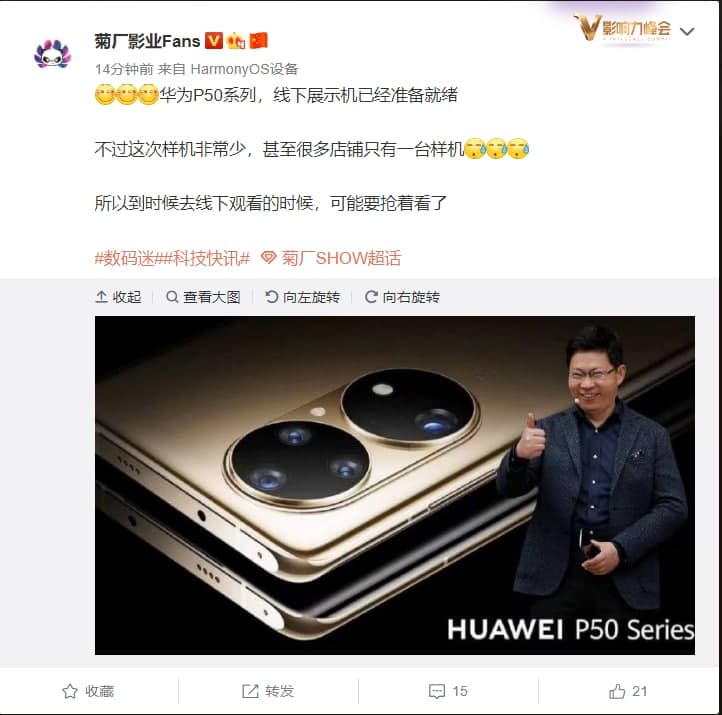 Most of these products will come with the latest HarmonyOS software for more enhanced users experience. And if you already have Huawei products then it will be even easier for you to control them using the new Super Device functionality.

Also, it was been reported that the new P50 phones will bring a new version of HarmonyOS 2.0. The already feature-packed OS will get more added tweaks. Further, we also expect Huawei to announce HM OS global plan.

Huawei’s latest flagship series will have three models including P50, P50 Pro, and P50 Pro Plus. All of these smartphones will be coming pre-packed with HarmonyOS 2.0 out of the box.

Due to the US ban on Huawei, it wasn’t able to use the component made by overseas manufacturers. To overcome this situation, the company switched to domestic components for the P50 phones.

The Huawei P50 phones are also said to feature an enhanced zooming camera, which the company has also teased in its initial teasers. A leak has also hinted that the company may include a 20x optical zoom along with a 200x digital zooming capacity.

All this information is mostly based on the leaks that have emerged in the last couple of days, while the company will clear them off after the launch. Meanwhile, you can also take a look at those two official teasers of Huawei P50.