Huawei P50 series will be available for sale in mid-August: Tipster

As we are approaching the launch of Huawei P50 phones, more related leaks are coming into focus. As such, the latest information from a Weibo tipster suggests that the upcoming Huawei P50 sale will start in mid-August.

It is reported that all the 5G models of the P50 series will go on sale at the same time. Isn’t the Huawei P50 sale too late? The late start of sales suggests component shortage for the Huawei and the company seems to be struggling in a lot of ways. 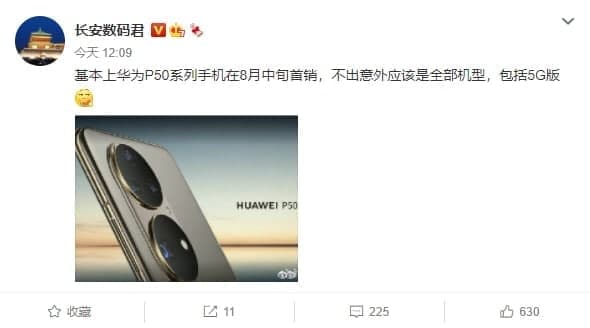 Ahead of the launch, Huawei has started releasing teasers for these upcoming smartphones showcasing its zoom capabilities. The Huawei P50 is said to feature a 20x optical zoom along with 200x digital zoom. Also, it was already known that the P50 models will come with powerful camera capabilities.

Huawei officially announced its next flagship products launch event to be held on July 19. This will be the time for the Huawei P50 series to get unveiled. Furthermore, the company will also launch several other products along with these smartphones.

Huawei is said to launch three models in the Huawei P50 series – Huawei P50, P50 Pro, and P50 Pro Plus. All of these phones will be launched with the new HarmonyOS 2.0 pre-installed. Further, these phones are said to be initially launched with Kirin SoCs and then Qualcomm’s Snapdragon.