As several phone makers have already launched their smartphone with the latest Snapdragon 888 chipset. The Chinese phone manufacturer, Realme is also planning to bring a new smartphone with this latest 5nm based chipset.

As per the latest information, Realme Race Pro will be the upcoming Realme smartphone that could be launched in the coming days. Meanwhile, we have also received some leaks related to the specs of the smartphone. This information is coming from the tipster IceUniverse who posted on its official Weibo account.

As per the info, the Realme Race Pro will come with a massive 5000mAh battery along with 125W fast charging support. It will be powered by the latest and the fastest Qualcomm Snapdragon 888 which is paired with 12GB of LPDDR5 RAM.

Along with the massive 5000mAh battery, 12GB RAM and Snapdragon 888 processor the smartphone has a lot to offer. Although it remains to be seen what actual performance it will deliver in real terms and at what price segment it will come with. Also, it is said that the Realme Race Pro will be an enhanced version of Oppo Reno Ace 2 which comes with the Snapdragon 888 processor. 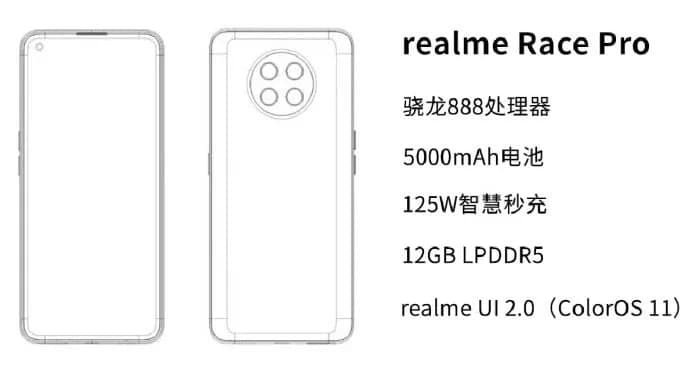 In terms of software, the phone will feature the latest Android 11 based Realme UI 2.0 based on ColorOS 11 operating system. As of now, there are no more details available for the Realme Race Pro smartphone and we’ll keep you posted as soon as we receive something new on this.

Xiaomi Mi 11 gets FCC certified, preparing for the global launch