On March 24, 2021, Realme unveiled its new phones under the Realme 8 series. The lineup comes with two handsets – Realme 8 and 8 Pro. These new smartphones come with a bunch of new features and for the first time, the company has included an AMOLED display on both Pro and non-Pro models.

Now, the company has planning to launch some other smartphones in the market. As per the latest info, Realme has confirmed that it will launch a new smartphone in its V-series, Realme V13 on March 31.

This smartphone design can be called a mashup of Realme V15 and Realme V11 5G which was launched a couple of months ago. At the front, it has a hole-punch display like the previous, while the camera housing at the rear is similar to the Realme V11.

As per the poster shared on Weibo, Realme V13 will have a punch hole at the top left corner of the screen. Additionally, it has a side-mounted fingerprint scanner and a 90Hz refresh rate of the display screen. 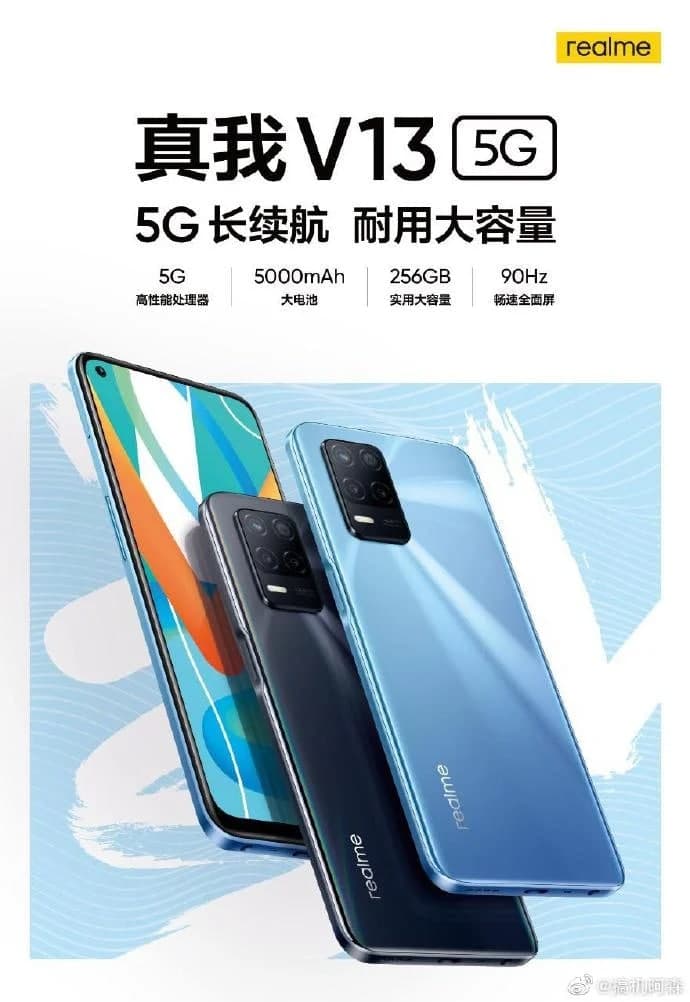 Talking about the other details shown in the poster it includes a 5G processor, 5000mAh battery capacity, and 256GB storage space. It also has an audio jack and a USB-C port on the bottom. The phone will be available in two colors option blue and black.

It also said that this phone has similar specifications to Realme V5 and Realme Q2, but has a Dimensity 700 processor that powers it. The poster also reveals that the phone will have 8GB of RAM and will have a price tag of 1,799 yen ($275). This phone will go on sale on March 31 and can be sold offline.

On the other hand, the company is also preparing to launch its flagship smartphone Realme GT 5G in the Indian market. This phone has already launched in China. Moreover, the company also confirmed that it will launch a new phone in its latest flagship series, Realme GT Neo on March 31 with Dimensity 1200 chipset.