Amazon is using the old-fashioned mailing method to ensure that sellers on its platform actually live where they claim to live.  After Amazon asked third-party sellers to disclose their business names and addresses in September last year, Amazon is now ensuring that their addresses are true and accurate.

In order to do this, according to an email seen by CNBC, the company began to mail postcards to third-party merchants selling goods in its US market to verify their addresses.

“We are committed to providing customers with a safe and trustworthy shopping experience and sales partners. As part of our commitment, we need to verify the address of the seller profile page displayed on the Amazon website,” the email said, adding that the seller’s address is in During the verification period, they will not be prevented from selling products on the platform.

Amazon confirmed to CNBC that the company began testing this initiative for new sellers last year and that the scope of the test was expanded to existing sellers at the beginning of this year. The company said it now plans to further expand its scale. Three third-party sellers told CNBC that Amazon notified them this week that they would soon receive a postcard to verify their address.

The copy of the postcard seen by CNBC showed that the verification code that the seller was asked to enter in the seller center was printed on the postcard. Sellers have 60 days to verify their address. Amazon said that if they do not, Amazon can withhold funds from the seller’s account. 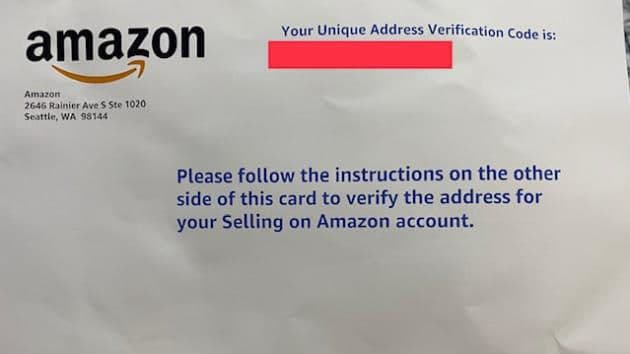 Amazon will close any accounts that are proven to use illegal addresses. If the seller’s postcard is lost during the mailing process, Amazon will allow them to request a new postcard to be mailed.

Last fall, the company began to require merchants in its US market to publicly disclose their business names and addresses so that consumers can more easily review these sellers and their products before making a purchase.

Amazon operates online markets in more than a dozen regions, but its largest market is in the United States. According to data from e-commerce research company Marketplace Pulse, as of the end of March, Amazon has more than 6 million third-party sellers worldwide, more than half of which are sold in North America.

Before the new policy takes effect in September, consumers can view buyer feedback and satisfaction rankings by clicking on the seller’s profile, or contact the seller for consultation.

But it is not easy to know the location of the seller or which legal entity the supplier of the product is unless the consumer is shopping on the Amazon market in Europe, Mexico, and Japan. Because according to the laws of the aforementioned countries and regions, sellers in these markets have been required to display their business names and addresses.

Amazon has grown into one of the world’s largest e-commerce companies. It has established a huge third-party market platform where millions of merchants sell products. Sales by third-party sellers account for more than half of Amazon’s revenue.

However, the sheer size of the platform has caused a series of problems for the company, including the proliferation of counterfeit, unsafe, and expired products. In recent years, Amazon has increased its management efforts to shut out unscrupulous sellers who may threaten its relationship with consumers.

For example, after being suspended by Amazon, merchants creating multiple accounts to continue selling products on the platform has become a common tactic, which violates Amazon’s seller policy. If a seller operates dozens of accounts, they must display a unique business address for each account and verify the authenticity of the address.

“This may be the only way to answer this question:’Is the address you told us the address you use?'” said Juozas Kaziukenas, CEO and founder of Marketplace Pulse. “Otherwise, sellers can enter any address and they cannot answer. The same problem, especially for international sellers. Amazon does require new sellers to provide bank statements and other documents that match the address they submitted, but this is a further requirement for old sellers.”

These are the best multiplayer games to play with friends online