Using various electronic devices? European Commission has a plan to force smartphones and other electronics companies to choose a common USB-C charging port on their devices.

It will make the biggest impact on Apple, the company uses Lightning connector instead of the USB-C connector, uses by several Android users.

This way, you can use an existing charger and cables on your other/new devices.

Are your chargers piling up in a drawer?

We propose a common charger for mobile phones and other similar electronic devices.

A single charger will be more convenient for people and will reduce electronic waste.

In addition, the buyers will have the option to buy a device without a charger in the box, which means that is not compulsory.

The commission also confirmed that these rules will be applicable to other devices like tablets, headphones, speakers, cameras, and video game consoles. The manufacturers will have to provide information to buyers about the charging standards support of their device.

These proposed rules are only applicable to devices with wired chargers, not for wireless. In addition, there won’t be any requirement for a USB-C charging port if devices exclusively support only wireless charging (no port for charging), there’s a rumor that Apple could launch future iPhone without a charging port. 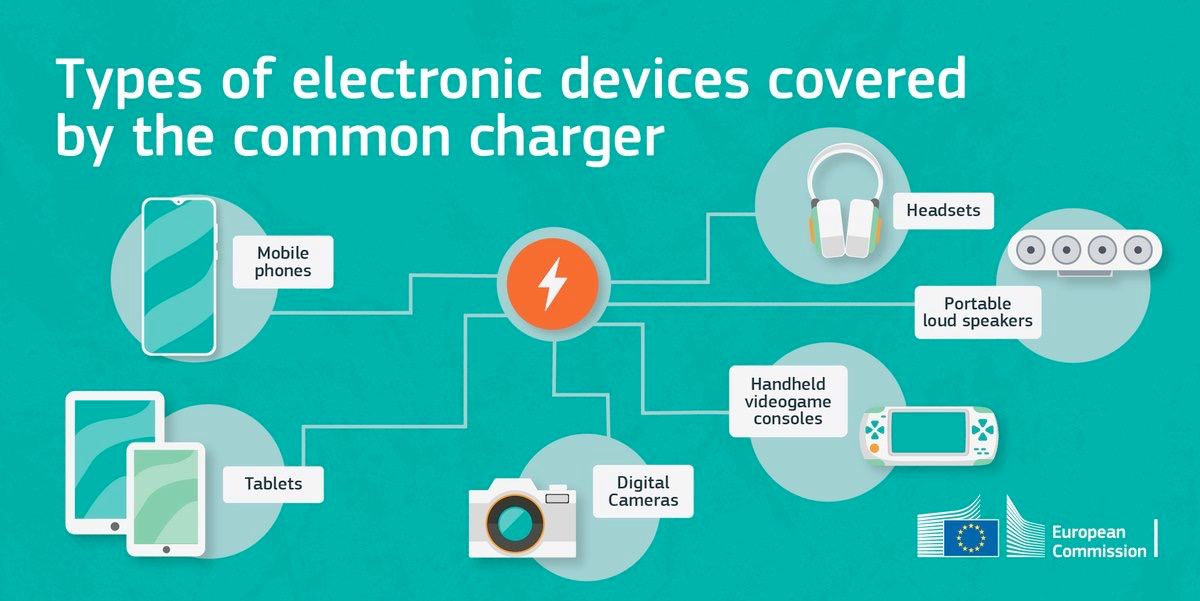 The Commission said, to reduce the e-waste and for the benefit of the consumers and the environment, the Commission has supported a common charging solution for mobile phones and similar electronic devices since 2009.

According to the European Commission, In 2020, approximately 420 million mobile phones and other portable electronic devices were sold in the EU. On average, consumers own around three mobile phone chargers, of which they use two on a regular basis. Despite this, 38% of consumers report having experienced problems at least once that they could not charge their mobile phone because available chargers were incompatible. The situation is not only inconvenient but also costly for consumers, who spend approximately €2.4 billion annually on standalone chargers that do not come with electronic devices. In addition, disposed of and unused chargers are estimated to pile up to 11,000 tonnes of e-waste every year.

As of 2018, around 29% of phone chargers sold in the EU used USB-C, 21% used Lightning, and around half used the older Micro USB standard, according to an EU assessment.

Apple said it disagreed with the proposals: “We remain concerned that strict regulation mandating just one type of connector stifles innovation rather than encouraging it, which in turn will harm consumers in Europe and around the world,” a spokesperson from the company told Reuters.

Commissioner Thierry Breton, responsible for the Internal Market, said: “Chargers power all our most essential electronic devices. With more and more devices, more and more chargers are sold that are not interchangeable or not necessary. We are putting an end to that. With our proposal, European consumers will be able to use a single charger for all their portable electronics – an important step to increase convenience and reduce waste.”

Today, the Commission is proposing:

The revision of the Radio Equipment Directive is part the Commission’s broader action to address the sustainability of products,  in particular electronics on the EU market, which will be the focus of a forthcoming proposal on sustainable products.

FiiO is set to launch the M17 portable desktop...

Tesla will raise the prices of Model 3...

ASUS could launch the Z690 motherboard on October...