Rajasthan Royals will return to winning ways after beating Sunrisers Hyderabad (SRH) in the Vivo Indian Premier League (IPL) 2021 match 28 at the Arun Jaitley Stadium in Delhi on Sunday. Jos Buttler slammed his maiden IPL century, powering RR to a huge total before the bowlers restricted SRH to 165 as RR won the game convincingly by 55 runs.

SRH were playing under the fresh leadership of Kane Williamson after the right-handed batsman was announced the skipper of the Sunrisers, replacing David Warner. Chasing a challenging target of 221, SRH openers – Manish Pandey and Jonny Bairstow – provided a solid start to the team. Bairstow attacked Chetan Sakariya’s pace early on and smacked two fours and a six in the third over.

Pandey, on the other hand, hit his first six of the innings in the next over against Kartik Tyagi. The right-hander then creamed two fours in a row against Chris Morris to bring up the fifty partnership for the opening wicket and SRH was 57/0 after 6 overs. Mustafizur Rahman broke the Bairstow-Pandey stand, right after the powerplay as Pandey was castled, courtesy a slower delivery from the left-arm seamer.

Rahul Tewatia then got rid of the dangerous Bairstow in the seventh over after the right-hander was caught in the deep by Anuj Rawat, who took a fine catch. SRH was 82/2 at the 10-over mark with Williamson and Vijay Shankar at the crease.

Chris Morris provided the third wicket for RR after Vijay Shankar was caught by David Miller at long-on. Kedar Jadhav smashed a six to release some pressure but SRH lost their skipper after Morris caught Williamson at deep mid-wicket and Tyagi scalped his first wicket of the innings.

With the required run-rate climbing over 15, Mohammad Nabi hit two fours and a six but once again an SRH batsman sliced it straight to the fielder as Nabi was caught at cover. With 92 required off the final five overs, Abdul Samad dispatched a six and SRH scored 11 of the 16th over.

However, Morris struck twice in an over to dismiss Samad and Jadhav. While Samad was caught by Rawat, Jadhav was cleaned up by the seamer. Mustafizur scalped his third wicket of the innings as Rashid Khan was holed out to Morris in the deep. RR bowled extremely well at the death and the target at the end proved to be too high for SRH as they fell short by 55 runs. 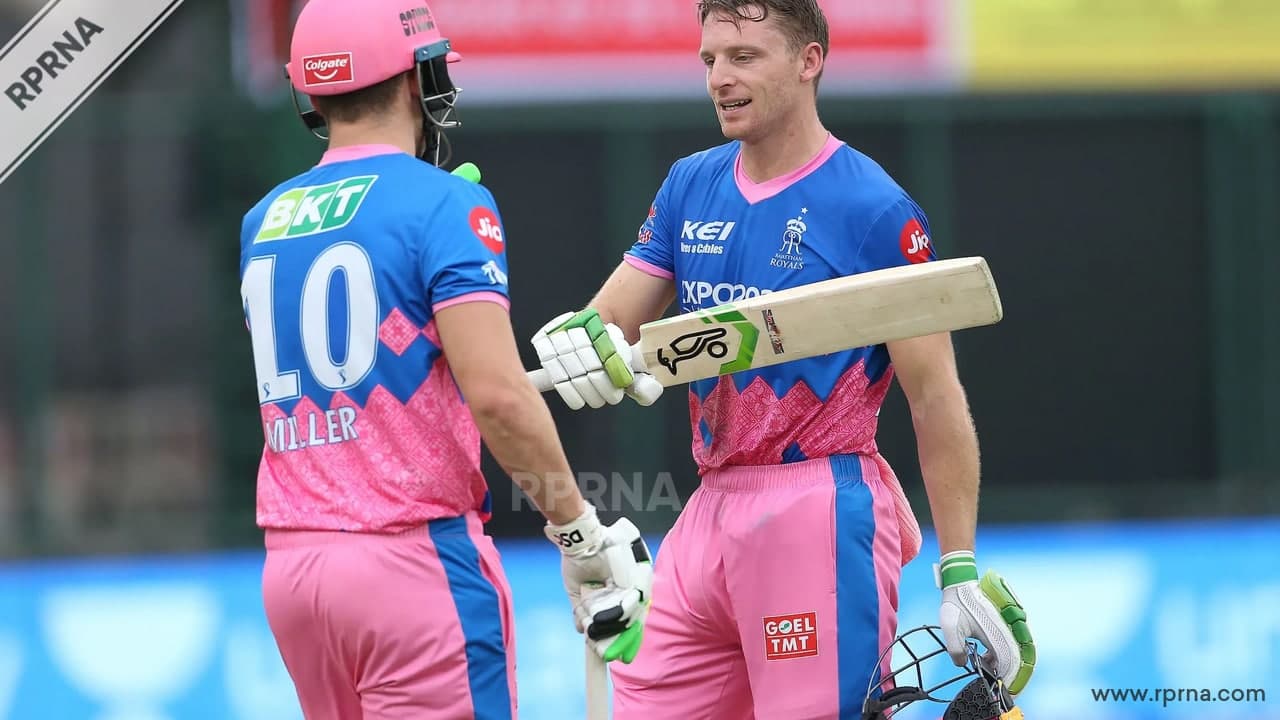 Earlier, RR, who were put in to bat first made two changes as Tyagi and Rawat replaced Jaydev Unadkat and Shivam Dube respectively. RR lost Yashasvi Jaiswal early after Rashid trapped the left-hander LBW with the new ball. Skipper Sanju Samson smashed his first ball for six while Buttler sliced a delivery for four against Khaleel Ahmed and RR were 42/1 at the end of the powerplay.

Vijay Shankar conceded 18 runs in the seventh over after Buttler and Samson smashed a six each, straight down the ground to bring the 50 up for RR. Samson added another four as he and Buttler brought their fifty partnership up for the second wicket in the 8th over after the RR skipper added another four. Manish Pandey dropped Samson’s catch in the outfield in the 10th over as RR moved to 77/1 at the halfway stage of their innings.

Buttler went for the innovation and executed a scoop shot for a four against Khaleel and later reached his half-century in style with a maximum against Sandeep Sharma. The hundred partnership was up for the duo. Buttler cleared the ropes against Khaleel in the 14th over and then smashed 20 runs off Nabi, including two fours and as many sixes as RR were 146/1 with 5 overs to go.

The Buttler-Samson duo added three fours in the next two overs before Vijay Shankar got rid of the RR skipper, who was caught in the deep by Samad. Buttler then struck a four and reached his maiden IPL century off just 56 deliveries.

Riyan Parag smashed a six straightaway after getting in the middle and Buttler continued his merry ways and scored 24 off Sandeep Sharma’s over, with Buttler smashing three sixes and a four against the seamer. However, Buttler played on to the stumps on the final delivery of the penultimate over, ending a remarkable knock of 124. David Miller finished off the innings in style with a six as RR posted 220/3 in the first innings.