According to Chinese media information, the MIUI development for the Redmi 10X, Redmi 10X Pro, and Redmi K30 Extreme Edition have now stopped until December 18, 2020.

Recently, Xiaomi has released the MIUI development version internal beta update with version 20.12.8. In order to welcome the release of MIUI 12.5, the version will be suspended for a period of time from December 14th. 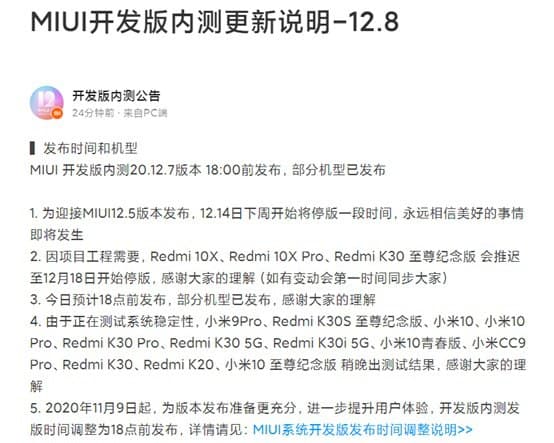 As per the new version changelog, this update brings the instant messaging application notification for notification bar, support for long press and pull down to enter the small window.

The beta update has been suspended for Mi 9 Pro 5G due to some known issues. The MIUI development for the Redmi 10X, Redmi 10X Pro, Redmi K30 Extreme Commemorative Edition will be delayed because the company is going to unveil a new version of MIUI – MIUI 12.5.

Earlier, we also reported that MIUI 13 will be presented in the second quarter of next year. However, this is an estimated date as it may be rolled out earlier or later. We are regularly tracking the latest news and information about the MIUI development so, stay tuned with us.

Before MIUI 13, Xiaomi smartphone users will get the taste of MIUI 12.5

[UPDATED] OnePlus 8, 8 5G, and 8 Pro will get regular security updates till April 2023 | Will continue with bimonthly updates