Just after the launch of the Qualcomm Snapdragon 888 processor, many phone makers have already announced to use it on their upcoming devices and Xiaomi was the first to launch the chipset with its Mi 11 series of smartphones. Now, Vivo’s subsidiary iQOO has also announced its upcoming smartphone that is iQOO 7 that will be powered by this latest generation SoC.

Now coming to the latest leak about the smartphone, recently the live images of iQOO 7 has been leaked which reveals its back design. The company has already exposed the BMW version of the device and with the leaked image we can also get a glimpse at the standard variant.

As shown in the live images, the iQOO 7 is leaked alongside its retail box which has a black color with a large number ‘7’ engraved at the bottom in a gradient purple. And a tagline that calls ‘Monster Inside’, while it remains to be seen, how this monster performs.

Talking about its rear design, which is actually different and unique, with a grey color the phone has strips on its back from top to bottom which is a ridge-like appearance. While the device has a triple rear camera setup in a triangular shape. Below the camera setup is the LED flash with the branding of iQOO written vertically. 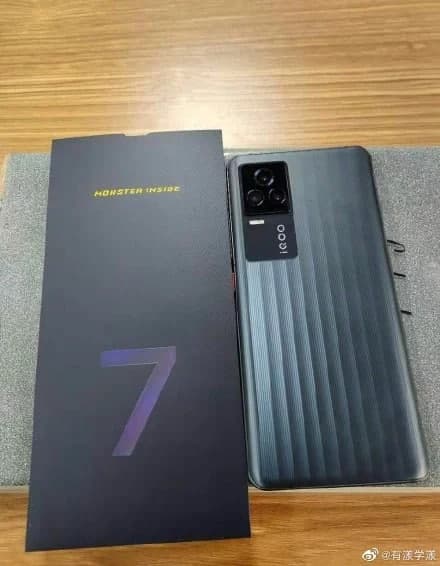 Other than these sort of leaks, the live images don’t reveal the front side of the smartphone but we already know from the official poster that the smartphone will feature a flat panel with a punch-hole camera for selfies.

As per the previously leaked information, the smartphone will come with many high-end features along with the latest chipset from Qualcomm. With the 120Hz display refresh rate, the device will come with the latest Android 11 operating system and will have  256GB of storage storing your data. Further, the smartphone will also support fast charging up to 120W and UFS 3.1 storage.

This is what we have now regarding this upcoming smartphone from iQOO and we will provide you with more information as soon as we receive something new about its price and the other specs.