Samsung launched its new generation foldable screen smartphone Galaxy Z fold 3 back in August 2021. This phone comes with plenty of new features and functionality.  However, it does miss the features of high-end smartphones equipped with in-screen fingerprint recognition sensors. This can be attributed to the unconventional plastic glass hybrid screen of the phone.

According to Samsung’s latest patent documents, the upcoming Galaxy Z Fold 4 folding screen smartphone may be equipped with an under-screen fingerprint recognition sensor.

LetsGoDigital accidentally found a Samsung patent on the World Intellectual Property Organization (WIPO) website, which talked about a double-sided fingerprint sensor. Basically, it will be located between the cover screen and the main screen. Since the cover screen uses a traditional AMOLED panel, it should not be as difficult to verify fingerprints as other smart phones. 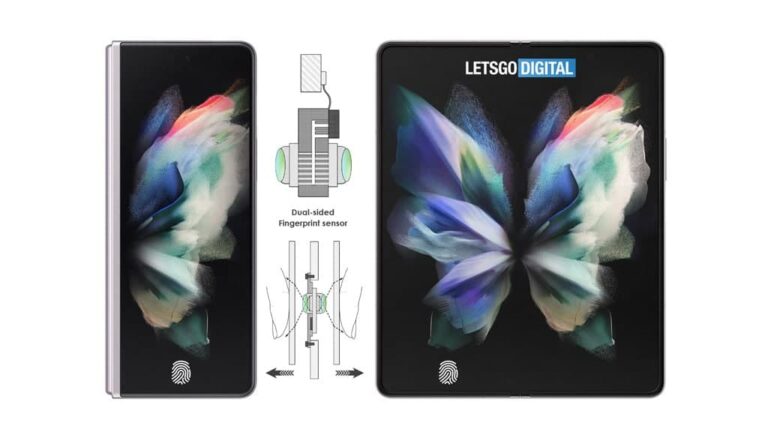 It also added that the two sensors will be connected to the main board via a PCB (printed circuit board). It will be interesting to see what tricks Samsung uses to make the fingerprint sensor on the secondary display work.

The evaluation of Samsung Galaxy Z Fold 3 shows that the side fingerprint sensor of this folding screen phone is doing very well. Samsung has no reason to switch to optical/ultrasonic alternative technology, but this will help distinguish the Galaxy Z Fold 4 from its predecessors, and it will also become the world’s first folding screen phone to adopt this technology.